On schedule, and as glorious as the other figures so far, I now have the third release from the Flags of War 1745 Kickstarter. This release was some Hanoverian Grenadiers loading, Bagot's Hussars, Artillery, and some other rather nice specials, like 'Rude' Highlanders and a very nice Hanoverian Sergeant.

I now have all the figures I need to do a reasonable sized Jacobite engagement for Sharp Practice, essentially 9 'groups' a side. For other rules, each figure could be 1-5 or 1-10 giving 40-80 men per group.

The corollary is that I now have no excuse for not getting started painting. I should really finish up what's on my workbench, but where's the fun in that.. ? So, inspired by another post of someone having painted the Royal Ecossais, or Lord Drummond's regiment. I grabbed a single base yesterday and had a crack at it. Here's the results... 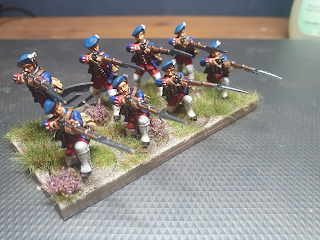 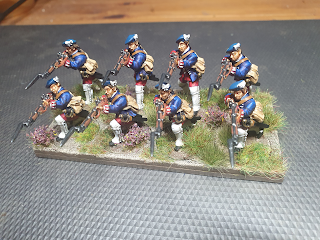 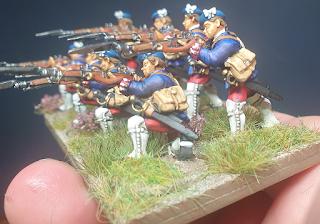 I have to say I'm very happy with how these turned out. Being uniformed, they are probably the easiest to paint for the Jacobites. The plan, (which will doubtless fall apart very quickly..)  Is to alternate between Hanoverian and Jacobite groups, doing one per side till they are all done. Although it might make more sense to tackle them 2 bases at a time, as the roster is:

Hopefully two fairly evenly matched sides. In hindsight, I probably should have made the Jacobite cavalry a 'mixed' unit of hussars, lifeguards etc, as the mounted were so few in number, especially compared to the relatively numerous Hanoverian mounted.

By wargamers logic, I should now do one of the 'line' units for the Hanoverians, having done the glamour boys for the Jacobites. But I have some red coats to do, time to crank up the airbrush!